When the spade you call a spade’s no spade

My least snappy title by a distance. Apologies, and apologies also for a blog inspired by a pun so obscure that I’ve seen it attributed to two Oxford Classicists separately. Actually it was really inspired by Claire Webster, to whom thanks.

“To call a spado a spado” is a joke that Claire heard Tom Braun, a Classicist at Merton College, make, but I can claim an earlier outing. A former student of my college, Brasenose, recalls attending lectures in the 1950’s on the Roman satirist Juvenal, delivered by J.G. Griffith of Jesus College. Juvenal does not pull his punches, and Griffith, clearly a don of the old school, “felt inhibited” discussing his poetry “when lady students were present.” When the last of the women undergraduates eventually left the group, he remarked with relief, “At last: now I can call a spado a spado.”

Not a very edifying scene to contemplate, and I’ve got a feeling this joke has been told for as long as Juvenal has been taught through the medium of English. Allow me to explain it. A spado in Latin is a eunuch, and though Juvenal in actual fact used the term sparingly (only three times in total), eunuchs were very much the kind of affront to Roman manhood that Juvenal’s spectacularly jaundiced style of satire specialised in attacking. In Satire XIV, for example, he lays into the spado Posides, a freedman of the emperor Claudius, for his extravagant building projects (see here for what might have been one of his villas on the Amalfi Coast), but it’s probably more relevant that when Juvenal launches his satirical project in his scene-setting first poem, explaining that he’s been driven to abusive poetry by the moral corruption he sees all around him in the city of Rome, it is with a “soft spado” taking a wife (cum tener uxorem ducat spado) that he begins (1.22).

The expression “to call a spade a spade” of course means to speak frankly and directly, to tell it like it is. A spade’s spadiness is the perfect analogy because it’s an utterly unexotic piece of equipment, with entirely practical and unglamorous uses. In fact humour can be got from the perceived distance between spades and specialness (“to call a spade a geomorphological modification implement”) or from intensifying the spade’s mundane associations (“to call a spade a bloody shovel”). Calling a spade a spade is a quality or disquality we could easily associate with Juvenal, and J.G. Griffith could apply it to the less roundabout style of discussing Juvenal’s satire he felt able to adopt once all the women had left the room. Hence “to call a spado a spado“.

Now, I’m not going to devote an entire blog, composed in the precious hours I’ve snatched from my new life as an administrative drone, to explaining a donnish pun. Luckily the original expression “to call a spade a spade” has its own rather interesting history.

Like a lot of colloquial expressions that we assume are just traditional, or maybe biblical, this is anything but. We owe it to the great humanist Erasmus, and the collection of aphorisms, the Adages, which he first published in 1500 but added to for the rest of his life, so that in its final form, in 1536, the Adages reached a total of 4,151 entries, a Herculean achievement as he himself described it. These proverbs were then translated from Erasmus’ Latin into the vernacular languages of Europe, and the result is that our everyday language is peppered with Erasmian maxims: if you ever talk about “a necessary evil”, “rare bird”, “squeezing water from a stone”, “looking a gift horse in the mouth”, “putting the cart before the horse”, you owe that turn of phrase, and heaps of others, to Erasmus.

These proverbs weren’t Erasmus’ own invention. He found most of them in the Greek and Roman literature that, as a Renaissance humanist, he saw as the key to building a civilized society. It helped that he achieved an encyclopedic knowledge of that literature. There really wasn’t much that Erasmus hadn’t read at some time or another. I once traced the common turn of phrase “to lose a battle, but not the war” back to Erasmus’ Adages, but he’d found it in the late-antique dictionary of Nonius Marcellus, which he read and exploited for the penultimate 1533 edition of the Adages.  I confess it tickles me that people, in the normal course of conversation, unwittingly repeat the words of classical writers: “a necessary evil” comes from the Greek geographer Strabo, “in the same boat” from a letter of Cicero, “one swallow does not make a summer” from Aristotle’s Nicomachean Ethics, “a friend in need is a friend indeed” (a jingle in Latin, too: amicus certus in re incerta cernitur) from a tragedy of Ennius via Cicero, “to lose a battle but not the war” from Juvenal’s great predecessor in Roman satire, Lucilius (for whom Nonius’ De compendiosa doctrina is an important source). It tickles me especially that the expression “to call a spade a spade”, which is all about using simple language, is actually the result of the most learned man of his day’s unparalleled familiarity with the literature of classical antiquity.

We’re all Classicists really, it’s just that some of us don’t know it yet.

“To call a spade a spade” is just one of these 4,151 aphorisms, no. 1205, in fact. But it has an especially interesting history. Erasmus introduced it, in the 1515 edition, as Ficus ficus, ligonem ligonem vocat, “He calls figs figs, and a hoe a hoe.” “It is applied,” he explains, “to the man who explains something as it is, with simple, rustic truthfulness, and does not wrap it up in complex or elaborate expression.” He traces his Latin version of the saying to a Greek original, ta suka suka, ten skaphen skaphen legon (τὰ σῦκα σῦκα, τὴν σκάφην σκάφην λέγων), a line of verse which he attributes to Aristophanes, the most famous writer of Attic Comedy, apparently on the basis of reading John Tzetzes, a twelfth-century Byzantine scholar. The saying itself he found in one of his favourite ancient writers, the Greek satirist Lucian: in Jupiter Rants (Zeus Tragoidos 32), Heracles excuses himself as a “country bumpkin” who, “in the words of the comic poet” calls “the skaphe skaphe” (for reasons that will become clearer, I’ll hold off translating skaphe for the moment); while in How To Write History (41) Lucian lists the qualities of a good historian, “fearless, incorruptible, independent, a lover of frankness and truth, prepared, as the comic poet says, to call ‘figs figs, and the skaphe skaphe‘.” The full expression in How To Write History, figs and all, probably comes from another comic poet (though in a very different style of Comedy), Menander (fr. 717 Koerte). But the source of the version in Jupiter Rants (Aristophanes fr. 927 Kassel-Austin) may indeed be Aristophanes, depending how much faith we place in Tzetzes (traditionally, not awfully much). 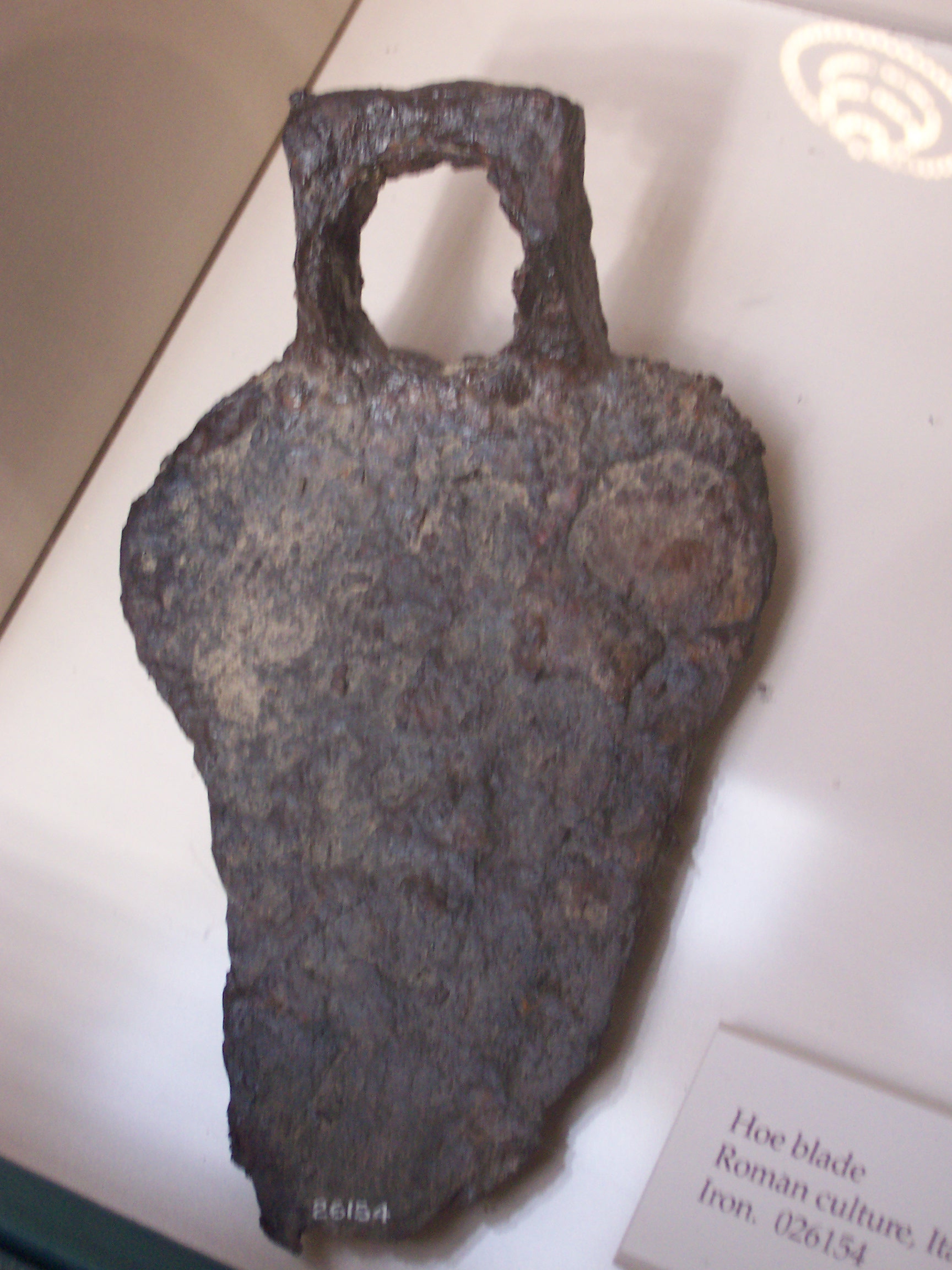 This Roman hoe, from the Field Museum of Natural History, Chicago, is a Roman hoe.

For its impact on our everyday speech, Erasmus’ Adages is one of the most influential books ever written. In relation to no. 1205, the English versions of the Adages that rapidly appeared, for example by Richard Taverner and Nicholas Udall, rendered Erasmus’ ligo as “spade”–hence the aphorism we still use today. But there’s one odd thing we haven’t mentioned about Erasmus’ 1,205th adage: it’s all wrong. The Greek word that Erasmus translated as ligo, “hoe,” and Udall as “spade”, skaphe (σκάφη), means no such thing. A skaphe is not a tool for excavating but something excavated, a dug-out canoe or, in this case, probably a kneading trough or dough bin. Now, “to call a kneading trough a kneading trough” references an appropriately mundane item of kitchen equipment, it is true, but it lacks the snappiness of “calling a spade a spade”. “Spade”, “hoe” or “mattock” σκάφη simply does not mean, and it reminds us that Erasmus’ learning of Greek was always a work in progress, but his blooper was serendipitous if, as I suspect, it ensured the popularity and endurance of the English expression.

There we have it, anyway, the history of a turn of phrase which we may not have imagined had much of a history. On the contrary, when you bluntly call a spade a spade, you are echoing the language of Athenian dramatists from 2,500 years ago, with a twist added quite unwittingly by the leading light of the northern Renaissance.

I'm a Classicist, lucky enough to work at Brasenose College, Oxford. I specialise in Roman literature, but I've got a persistent side-interest in Afghanistan, particularly the scholars and spies and scholar-spies who visited the country in the nineteenth century.
View all posts by Llewelyn Morgan »
« Previous post
Next post »